Morgan immediately rescinded the statement she had made under threat of physical violence from Fund.  She called me, as I recall in late January 2002, incoherent with a garbled story about being physically dragged from the apartment I had rented for her to a local notary.  I was flying to NY in a short time and told her she should memorialize this event and report it to the police.  I don't know if she did but suspect she did not.

Legalneed12401@aol.com was the email address, as I recall, she said she had made up to use just to send this communication, which would place the event not in January 2002 but December 4, 2001 for writing the letter. The 'confession' letters were notarized on January 24, 2002, which is reflected on the letter, which appears on Fund's website.

This email is in my file which she later sent to herself Hellion3793 and mural1972us, two email addresses she used.

Being of sound mind and body id declare this a
true statement of the facts and the situation that I am in. I live at 250
first St. 1D,Jersey city,NJ.07302.My boyfriend of the past 3 years, John H.
Fund, an editorialist at the Wall Street Journal, has been hitting and
beating me since I moved in with him late this past July. I am trying to get
a job and get out of here, but have had to call the police in before and the
last time when they came I was shaky and agitated so he told them I was out
of my mind and crazy. They seemed to believe him because he was very calm. I
was hysterical, he had thrown me down on the bed and I thought he was going
to rape me. He has rules I must live by: I can't answer the phone or take
calls, and as I have been job-hunting this is really hard to do. This morning
Mr. Fund forced me to write a letter denying the charge of beating me, He is
a friend of VP Cheaney,and a charge like this could hurt his carrier. I wish
to get out and am trying to, but it hasn't been easy and I am terrified of
him. I wrote the letter at around 8 am today and it is almost 7pm now. I will
seal this email account and not open it until asked by the
court.Morgan(Carolyn) Pillsbury

I thought I wanted a career, turns out I just wanted paychecks

Posted by Melinda Pillsbury-Foster at 2:49 PM No comments: 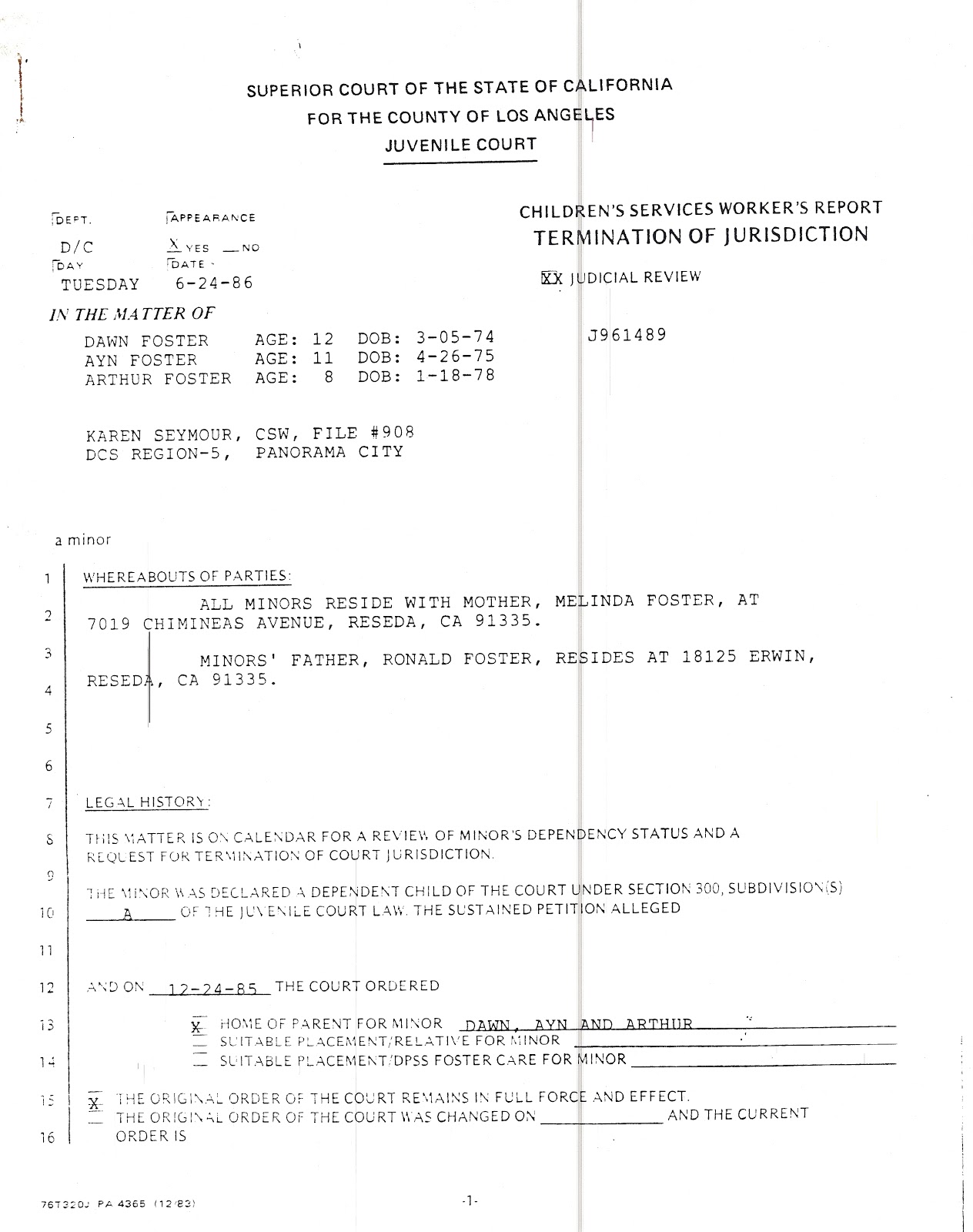 Posted by Melinda Pillsbury-Foster at 5:28 AM No comments:

Time and place of incident:

I cannot have Ron and Beverly charged with a criminal offense, but I  can sue them.

Posted by Melinda Pillsbury-Foster at 5:26 AM No comments: 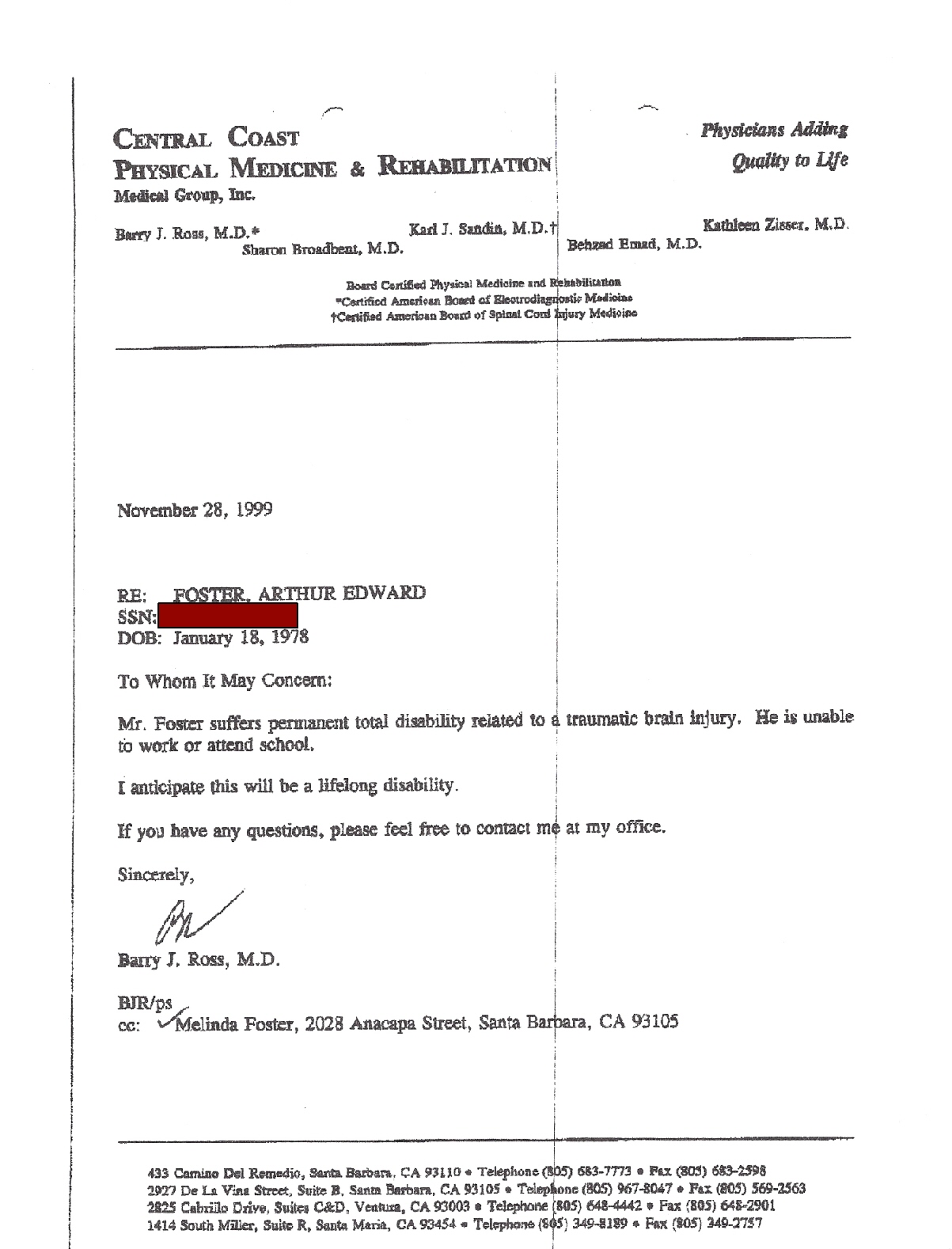 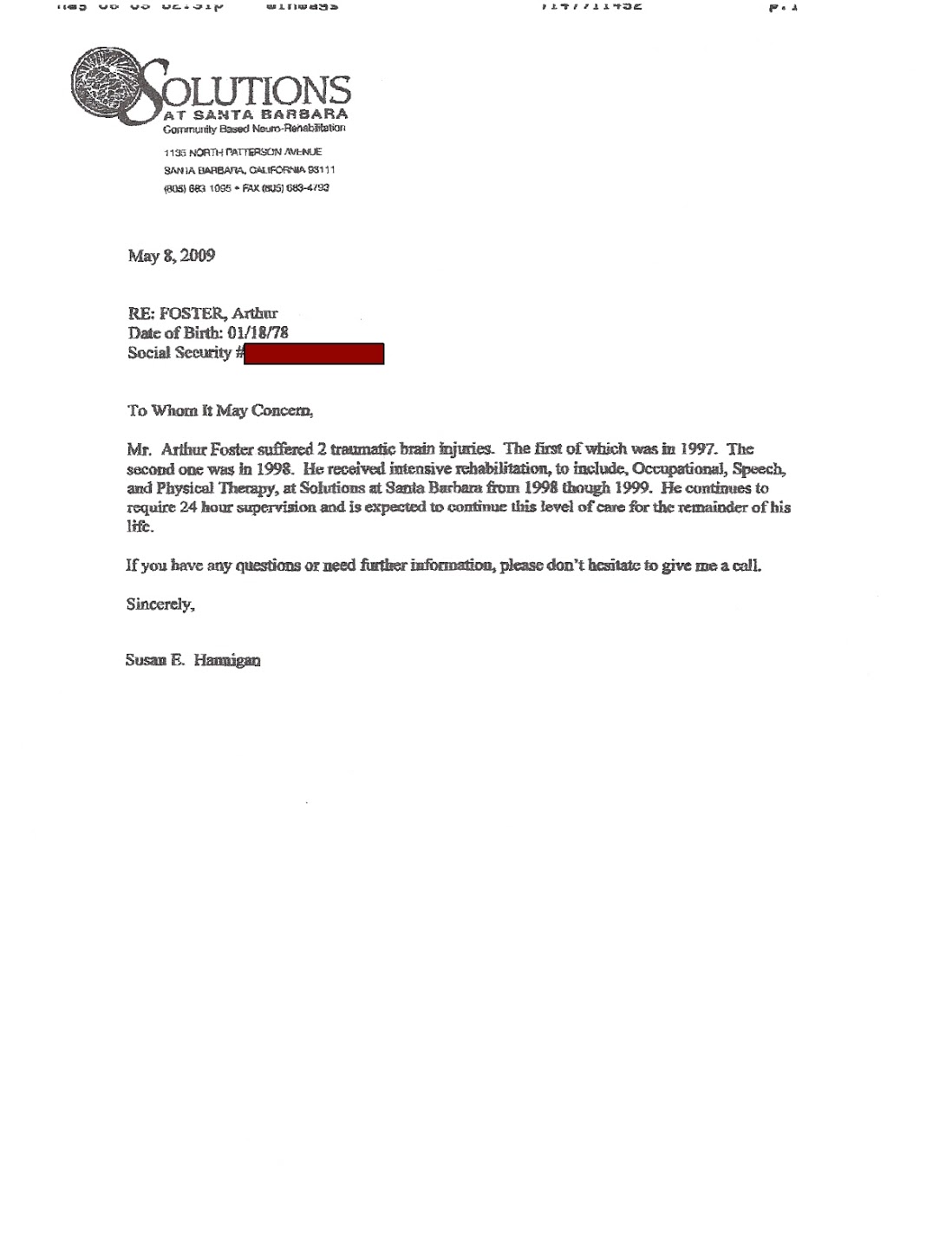 Posted by Melinda Pillsbury-Foster at 9:03 AM No comments:

Until you have responded to this there is no point in reiterating that Arthur is no longer taking any medication.  You will note that I am no longer willing to receive information through Arthur, for good and sufficient reasons, fully outlined in the letter.  I retransmit this to impress on you that you will have to call me directly.

Posted by Melinda Pillsbury-Foster at 9:06 AM No comments:

Posted by Melinda Pillsbury-Foster at 8:57 AM No comments:

Mr Jordan:  I am conservator for my son, Arthur, who is completely disabled due to injuries suffered in the accident in question.  Subsequently, Arthur shot himself in the head and suffered further brain damage and was paralyzed on the left side.  Again, this was a direct result of the accident.   Arthur maintains that the car pulled out in front of him and had the only and last chance to avoid the collision.  I believe him.
The insurance bills have amounted to hundreds of thousands of dollars.  Since Arthur is in a conservatorship he cannot appear for himself.  I am now undergoing treatment for several medical problems and am having an angiogram tomorrow and being scheduled for a corneal transplant.  Therefore it will be difficult for me to appear in his behalf, necessitating the continuance of this matter for an indefinite period of time. .  But I would like it resolved.  Your advise would be appreciated.
Please let me know what needs to be done in this matter.
Sincerely, Melinda Pillsbury-Foster

Posted by Melinda Pillsbury-Foster at 8:48 AM No comments:

SPECIAL INTERROGATORY NO. 3. The incident took place in the home of Ronald Edward Foster ( AKA Ronald Edward Kellett) and Beverly Foster on Sunday, March 22, 1998, at around 12:00noon.

SPECIAL INTERROGATORY NO. 5 I do not know if my son is competent to testify.

4. Having same xeroxed and sent by bookkeeper.

1.1  My name is Melinda Pillsbury-Foster.  My address is 2028 Anacapa Street, Santa Barbara, CA 93105, (805) 569-0421.  I am the mother and conservator for Arthur Edward Foster and will be answering the following questions on his behalf.  Arthur lives with me and has the same contact information.

2.3  At the time of the incident Arthur Edward Foster had a bvalid California Driver’s Lisence.
(a) No.
(b)  car and motorcycle
(c)
(d) none

2.13 Smoked part of one marijuana cigarette several hours before incident.

(a) Loss of short term memory and executive functions.  Loss of peripheral vision in left eye. Loss of teeth and related dental problems.  Plate in right arm.
(b) injuries are permanent.

8.0 Loss of income or earning capacity

8.2 Mr. Foster was a full time student majoring in engineering.  His earing capacity was not predicated properly on current employment.

8.8 For the rest of his life.  He is permanently disabled.

9.1Costs which will be born by my mother, who has full time care of my person.

10.3 Yes, because of depression brought on by the accident and my brain injury I shot myself in an attempted suicide.  This occured March 22, 1998.  This occured at 7019 Chimineas Ave.  Reseda, CA 91335, at the home of Ronald Foster.  No one else was involved.

12.0 Investigation - General
I do not know who witnessed the incident.

12.4 I know there are photographs in the medical records.  That is all I know of.

Posted by Melinda Pillsbury-Foster at 8:37 AM No comments:

Response to interrogatories
Case No. LC48070
By
Melinda Pillsbury-Fostter
Plaintiff

1.0 identiy of Persons Answering These Interrogatories

2.4 I have never had anyother lisence

2.9  I speak English with ease

2.10 I read and write English with ease.

2.12 Yes, my son, Arthur, had  suffered a brain injury from a motorcycle acident he had   survived in September and was despondent.

4.0 Insurance
At the time of the incident I had the following insurance:

4.2 I’ m not sure what this means.  I have a life insurance policy on myself, home insurance and auto insurance.  That is all.

6.5 Yes.  Vicadine with codeine. I have been taking it for several months.

6.6  Yes, but I am not claiming them for reimbursement.

6.7  I am incapacitated because of the migraines and cannot work.

8.3  I was not  working for monetary compensation when the incident occured.  I could not           because I was my son’s conservator and because of my health.

8.4 My income is from spousal support solely.

8.5 I cannot seek employment.  I am needed at home for Arthur and I have migraines.

8.6  I have now sought employment because of my migraines.

8.7  I was in the process ofwriting a book when the incident took place.  I do not know     how to calculate my losses.

8.8  Yes, I will.  I cannot seek employment because of the migraines andbecause I need to            be here to act as Arthur’s caretaker.  Iestimate that it wil take two  years to have         Arthur able to live on his own without my day to day oversight.

9.1  Yes, I had tospend money for medical expenses for Arthur.  I will have my     bookkeeper send long a read out of those figures.

10.1 The migraines began to worsen after the incident.  I had never sought medical           care for migraines before then.

11.0 Other Claims and previous claims

12.0  All of my infirmation regarding the actual incident is heresay from three cources.  The         first two sources, Ronald Edward Foster and Beverly Foster are both very     .           unreliable.  The third source is my son, Arthur Edward Foster.  His contact        information is stated in this document.  Ronald and Beverly’s contact information is             readily available through court documents.

12.7  Yes,I went by and looked at the grass where Arthur shot himself several days later.

14.1 Yes. Ronald Edward Foster, informed of the potential in Arthur for a suicide attempt            recklessly ignored the risk, allowing Arthur to go to the mall unaccompanied on         Saturday, where Arthur states he tried to throw himself off the parking structure.        Prevented by the presence of security, he returned to the house in Reseda.  Left            alone  there on Sunday morning while Ronald Edward Foster and Beverly Foster went to get breakfast at Taco Bell at around 11:30am, Arthur went to get the gun, which was kept loaded, according to him, by their bed, and went into the back yard             and shot himself though the mouth into his brain.
I did not know that Ron kept guns in the house.
Ronald and Beverly had both been informed of the risk and had promised
not to allow Arthur out of their sight for his entire visit.  They had each read a       suicide note Arthur had sent the previous week.  I was informed of  this by Beverly       shortly after the incident.
But I had called on the previous weekend from Texas, where I was at a      conference with Arthur’s sisters, Dawn and Ayn, because Justin had found a            suicide note Arthur had left there.  I was called my the old friend, Vicky Emerling,     who was stayingwith the boys in my absense and informed of the note.   Arthur   was then in Reseda with Ron and Beverly.   In the call I made immediately            thereafter  I asked Ron to check on Arthur.  I asked him to keep him on Sunday             night so that I would be there when he arrived home.
When Arthur returned home I took him to a medical doctor, Dr. Richard    Danson.  He had taken a corrosive substance, Draino, I think. He had tests to             ascertain that no damage had been done.   On Wednesday I took him to a therapist,       Dr. Marquart, who talked to him about his depression.  On Friday Arthur went to             his regular rehabilitation visits at the OutPatient Rehabilitation of Santa Barbara.          They called me to tell me that they thought he was a potential danger to himself.  I             called Dr. Danson to arrange to get him in a treatment program on Monday.
I informed Ron of each of these developments as they took place.  I told     him on Friday I was reluctant to allow Arthur to come because of the risk if he was        not watched.  Ron then guaranteed he would keep a 24 hour watch on Arthur.  I      reluctantly agreed to allow him to go to Los Angeles.
They, Ron and Beverly,  were to put him back on the bus on Sunday                      afternoon.  I was to pick him up at the terminal in Santa Barbara.  Each of          these    points was discussed within the hearing of Arthur who remembers the discussion      which took place over the phone while he and I were in the breakfast nook in Santa     Barbara Friday afternoon.    Each point was further discussed with  Dawn, 24             then and living at home.  Dawn remembers discussing these points with     Beverly.

Posted by Melinda Pillsbury-Foster at 8:29 AM No comments:

Sbjt:  Letters of explanation and apology to recipients of checks bounced on account number 153-9-49805

I am also sending the copy of the letter I received so that you can cross reference the check numbers to the amounts.  I assume that no more checks were bounced today, October 5th.

Posted by Melinda Pillsbury-Foster at 7:50 AM No comments: