There were two land lines in the NY apartment.  One was in Morgan's bedroom the other in Melinda's.  Melinda was not spending much time in NY because she was full time caretaker for her son, Arthur, and her younger son, Justin, was still high school age.  At this time, all calls appeared on the phone bill.  Morgan and Melinda each had a cell phone, as did John Fund.  But while Fund was staying at the apartment with Morgan, this unknown at the time to Melinda, he was sneaking into Melinda's room to call his 'female acquaintances.'

Morgan dictated a time line of Fund's time with her at the apartment in 2000 - 2001 because of the lies Fund was telling about their relationship.  This time line covers the entire year of 2000 through February 2002 in detail and was finished before the issue of use of the phone came to light.

This information was disclosed when Morgan was asked to account for calls which Melinda's bookkeeper and Melinda could not identify.  Melinda asked her bookkeeper to send on copies of the phone bills, one of which you see below to Morgan, who said she never used Melinda's phone.  But Morgan went over a copy of the bill showing the calls and then called the numbers herself.  The identity of those receiving the calls along with the dates were illuminating to Morgan as all of them on this particular bill were to Diane Sykes, then a judge in Milwaukee, WI.

All of the calls were to other women.  The ones on this bill were to Diane Sykes, a sitting judge in Milwaukee, WI recently considered, in 2018, for the U. S. Supreme Court. 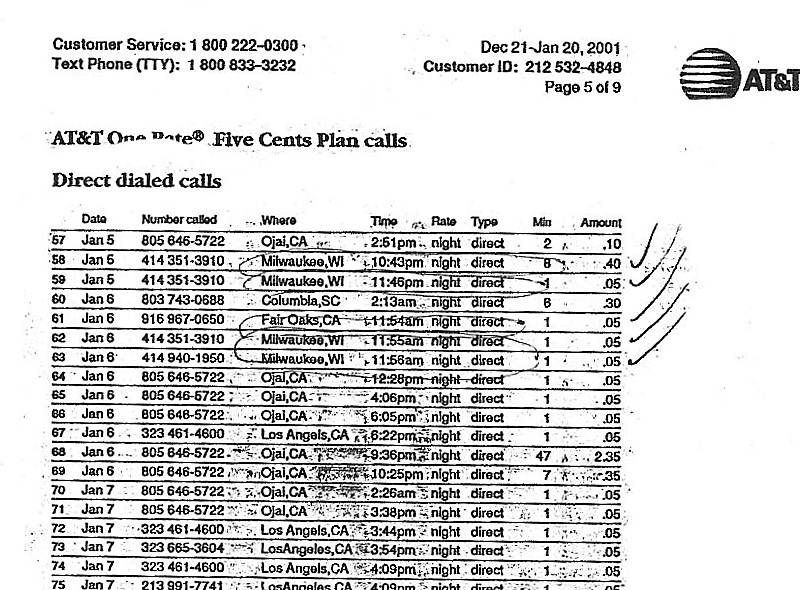 2000
November – John starts coming over to the apartment on 34th Street and living with Morgan.  They watch movies together, go out to eat, and sleep together.  Their conversation went to their mutual interest in Star Wars and John's fascination with his rising rating on Google.

New Year’s Eve 2001
John had been staying with Morgan for 4 days straight.  They are bedmates and best buddies.  Morgan is about to move out however since Melinda is closing the apartment in Manhattan.

Posted by Melinda Pillsbury-Foster at 1:31 PM